It was a momentous occasion in history, for America’s first Black President, Barack Obama, to be sworn in for his second term, on the day that commemorates the legacy of Dr. Martin Luther King, Jr.

As the nation celebrated in frigid temps on the national mall, or joined in by way of television or online streaming, millions of peoples, watched as President Barack Obama publicly took the oath for the second and final time.

As the world relished in the moment, and took in the Presidential address, with political heavy weights like the Clintons, and Jimmy Carter. Even celebrities from John Legend to Chris Tucker were spotted in the crowds a spectator like everyone else. While the crowds, and cameras were focused on Obama, a feeling of pride arose in me as I took in the number of Black women who played pivotal roles in the inaugural ceremony. From the invocation to the first dance, Black women took center stage.

Take a look at the Black women and the phenomenal roles they played in the 2nd Inauguration of President Barack Obama:

Williams delivered the invocation at the inauguration making her the first female to ever deliver a prayer at a presidential inauguration. Evers-Williams says she’s “honored” to be speaking at the President’s inauguration in Washington DC. Fifty years ago, She was scheduled to speak in at Martin Luther King’s March on Washington, but was too upset about her husband’s death months before. Last week, onPolitics Nation, she told Al Sharpton, “For years I thought, I’ll never be able to do anything like that again–and here we are 50 years later, I’ve been asked to deliver the invocation…. I’m just so appreciative, so thankful…. I never imagined that this would happen in my wildest dreams.” -Jezebel.com (click quote for full article).

In an interview with Ladies Home Journal, Barack said this about his, “rock” : Well, look. Michelle is one of the smartest people I know. She is my chief counsel and advisor. I would never make big decisions without asking her opinion. Certainly about my career and my life.

As she walked onto the stage to join the President for their first dance he introduced her with these words, “Some may dispute the quality of our President, but nobody disputes the quality of our First Lady,” he said. “Ladies and gentleman, my better half, and my dance partner, Michelle Obama!”

The Girls!: Sasha and Malia Obama 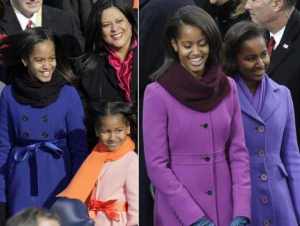 Can  you believe how much they have grown in four years? Growing into beautiful young ladies. But just because you’re the First Children doesn’t mean you can’t have a little fun right? Throughout the festivities the girls were seen playing with the cameras on their phones they even got got Barack and Michelle to kiss for one picture. (It took several tries…but we’re sure Barack wasn’t complaining) 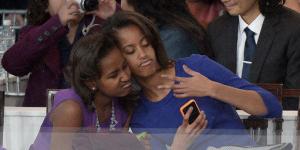 Beyonce, who campaigned with media mogul husband, Jay-Z during the election, led the crowd in a stirring rendition of the Star Spangled Banner. Watch.

And that was all before noon.

As the night got underway, and everyone traded in their coats and gloves for eye-catching formal wear. At the inauguration ball, grammy-award singer, Jennifer Hudson started the party as Barack and Michelle, took the stage for their first dance with her version of Al Green’s “Let’s Stay Together.”  Watch.

To keep the party going, Alicia Keys spiced up the night as the singer modified the lyrics to her song “Girl on Fire” in tribute to the president and Michelle Obama. 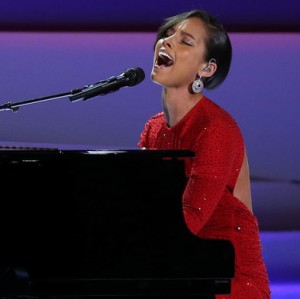 “He’s living in a world and it’s on fire,” Keys sang on a medley that started with “New Day.” “Filled with catastrophe / But he knows he can find a way.” Later, the singer ad libbed, “Everybody knows Michelle is his girl / Together they run the world.” Rolling Stone.

"Black women, even if nobody else sees you, I SEE YOU...We are worth protecting and we are worth loving." -Mara Brock Akil (Television Writer and Producer) BLACK GIRLS ROCK 2013

Stepping Out Into The World

The student programming board of the University of Georgia

Designed to EMPOWER women at every stage of life

The Soundtrack of My Life

The Original Down Home Critic