[This piece was originally posted on Ebony.com]

In the March issue of EBONY, Jamilah Lemieux examines how social media is creating a new Black power. 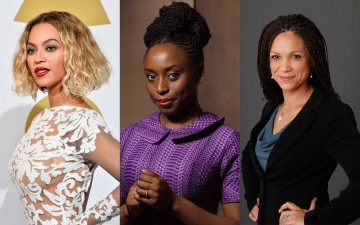 When Beyoncé released her ‘surprise’ self-titled album late last year, cameos from artists such as Drake, Frank Ocean and her husband, Jay Z, were upstaged by someone unknown to many members of the “Bey Hive.” An excerpt of Nigerian author Chimamanda Ngozi Adichie’s powerful TEDx talk titled “Why We Should All Be Feminists” can be heard on “Flawless,” as the song previously released as “Bow Down” is reimagined as a thorough read of the gender police: We teach girls to shrink themselves, to make themselves smaller. We say to girls, You can have ambition, but not too much. You should aim to be successful but not too successful, otherwise you will threaten the man … We raise girls to see each other as competitors not for jobs or for accomplishments … but for the attention of men … The author ended her speech with her definition of a feminist: A person who believes in the economic, social and political equality of the sexes.

Bey is hardly the first Black female megastar to make a boldly feminist move. There is the sexual autonomy Janet Jackson inherited from Blues godmothers Bessie Smith and Ma Rainey, the fierce folk tunes of Odetta and rock goddesses Betty Davis and Grace Jones, which are not to be dismissed. Beyoncé’s public engagement of the word “feminism” sparked a rapid-fire discussion on social media platforms, continuing a dynamic dialogue that has been bubbling up on Twitter and Facebook.

Gone are the days in which feminism is easily dismissed as the territory of privileged White women or limited largely to those who live in academic and activist circles. There is an emergence of boldly Black feminist thought spreading via big and small screens, from the whip-smart progressive voices of pundits such as MSNBC’s Joy Reid and Goldie Taylor and CNN’s Marc Lamont Hill to the blogosphere. “Black Twitter” is routinely buzzing with debates that go beyond the trite Mars/Venus politicking and instead finds women and men engaged in deep conversations about how gender impacts equality, access and freedom. Is feminism simply the latest hot topic, or are we witnessing the beginning of a new Black liberation movement?

“I think Black feminism is in one of the strongest moments it has seen in a while,” says Brittney Cooper, assistant professor in the Department of Women’s and Gender Studies at Rutgers University. “From Melissa Harris-Perry on MSNBC, to Laverne Cox on Orange Is the New Black to Beyoncé … we have prominent Black women identifying publicly with the term. There is also a robust crop of young Black feminists online who keep pushing the conversation forward, doing activist work in communities and generally taking no prisoners when it comes to racism and sexism.”

Black women and men have engaged in feminist work for centuries. Abolitionist Maria Stewart’s 1832 speech “Why Sit Ye Here and Die?” denounced the lack of access to education and employment afforded to even free Black women. In 1892, pioneering scholar Anna Julia Cooper published A Voice from the South, one of the first texts to thoroughly examine the ways in which Black women are subject to unique forms of discrimination and oppression based on race and gender. W.E.B. Du Bois’ The Damnation of Women, published in 1920, makes a case for the improvement of living conditions for Black women and is considered one of the first Black male feminist writings.

To speak the names of the Black women—and men—who have done critical feminist work, regardless of whether they ever embraced feminist as a moniker, would require half the pages of this magazine: Sojourner Truth, Angela Davis, Audre Lorde, bell hooks, Beverly Guy-Sheftall, Alice Walker (who coined the term “womanism” to speak specifically to the contributions of Black women to feminist work), Rebecca Walker, Patricia Hill Collins, Toni Morrison, and the list goes on. (Visit EBONY.com for “100 Black Feminists You Should Know.”)

Although Beyoncé has certainly captured our attention, it would be absurd to consider her a leader of a movement. She’s a student, an admittedly new one at that, and she’s also not above feminist criticism. Adichie has declined comment on her voice being used by the pop star, so one may wonder just how she feels about Beyoncé’s brand of feminism (and Jay Z’s controversial “eat the cake, Anna Mae” bar reveals that there’s certainly room for some critical feminist discourse in the Carter household, to say the least). Yet she serves as a valuable entry point to discussions of feminism for people of all ages.

Between Race and Gender

Conversations about Black feminism are often charged with first establishing the unique space in which Black women exist: subject to both sexism and racism (and that’s without mentioning classism, homophobia, ableism and any other number of ways in which a Black woman can be “othered” by society), yet largely marginalized by White women and Black men when those issues are being addressed. Racial privilege allows White women increased ability to challenge gender-based oppression while still maintaining access and freedoms that women of color are routinely denied.
Read FULL article here

"Black women, even if nobody else sees you, I SEE YOU...We are worth protecting and we are worth loving." -Mara Brock Akil (Television Writer and Producer) BLACK GIRLS ROCK 2013

Stepping Out Into The World

The student programming board of the University of Georgia

Designed to EMPOWER women at every stage of life

The Soundtrack of My Life

The Original Down Home Critic